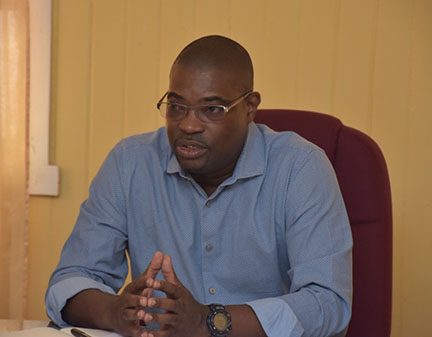 -as Public Accounts Committee set to meet next week

Designated Chair of the Public Accounts Commit-tee (PAC) David Patterson yesterday signalled his intention to request special audits of the COVID-19 relief grant programme and the single-source procurement of 44 tractors by the Guyana Sugar Corporation (GuySuCo).

During a virtual press conference held by the Alliance for Change (AFC) yesterday, Patterson repeated the call for Speaker Manzoor Nadir to convene all standing and select committees in particular the PAC.

This committee, which last met on August 6, 2018, is a full three and a half years behind in its examination of the public accounts as detailed in the various Auditor General’s Reports, the opposition parliamentarian lamented.

He explained that the Parliamentary Standing Orders prescribe that the Speaker convene the first meeting of each committee so that a Chairperson can be elected from its members. The same Orders, according to Patterson, provide for the Speaker to nominate either the Deputy Speaker or another member of parliament to convene the meeting on his behalf if he is unavailable.

In the absence of government members of the committee, Patterson believes the meeting can still go on.

“Three members constitute a quorum… the opposition has four members…the Chairman of the Committee must come from the opposition – thus the attendance of the Government members, while desirable, is not necessary,” Patterson said while explaining that the meeting is likely to be very brief since the first meeting of the tenth PAC lasted a mere 15 minutes.

He went on to note that Opposition Chief Whip Christopher Jones has received unofficial communication from the Speaker indicating that the first meetings of all Committees will be held on Monday and Tuesday but stressed that this has not been officially communicated as required by the Standing Orders.

“Standing Orders require Members to have three days’ notice before the holding of a meeting, and as of [Friday], no Member of the Opposition received notice for a proposed meeting,” he said.

Nevertheless, Patterson has already outlined his agenda for at least the first few sittings.

“Whenever the PAC sits to meet, I intend to request reports on several troubling issues that have [and] are developing,” he said explaining that these include the procurement process at GuySuCo.

The sugar company announced on Monday that it would be purchasing via an “accelerated procurement process” 44 articulated tillage tractors to contribute to its soil improvement programme.

The tractors are being purchased from Game Equipment LLC, formerly Cameco.

GuySuCo’s Chief Exe-cutive Officer (CEO) Sasenarine Singh while responding to questions from Stabroek News stated that attempts had been made to reach out to the local private sector to rent tractors but after a less than satisfactory response the company has moved to procure “sugar specific tractors” through an accelerated procurement process.

Asked to explain this process he described it as being “focused” on the procurement process and working weekly to see it through.

These tractors are projected to cost nearly half, $1.5 billion of the $5 billion allocated by government for the revitalization of the sugar industry.

“I intend to ask the audit office to perform a value for money audit on this procurement,” Patterson announced yesterday.

The questions he would like to see answered include: How and why was this brand of tractor selected; what investigations were conducted to ensure that these tractors are suitable for the soil and climate conditions in Guyana; does GuySuCo have any experience in operating and maintaining tractors like these and is there training for staff to drive and operate the vehicles and implement a maintenance programme?

He reminded that tractors sourced from India in the past could not work because the soil was very different, so the tractors were distributed to hinterland communities where conditions were more suitable.

“When you start to change the entire regime of the company an investigation has to be done to ensure it’s not a hare-brained scheme,” the parliamentarian asserted.

In relation to the COVID-19 relief fund, the PAC, under the direction of Patterson, will be seeking an operational report.

Patterson stressed that although the financial expenditure for the project will be included in the Auditor General’s 2020 report, several other issues with regards to the distribution programme have arisen.

These issues include claims that several persons and areas have been bypassed. In cases where large families of more than one household occupy a single building there have been reports that only a single family or part of the building have received funds.

“We have also received report that sections of communities supportive of the (APNU+AFC) Coalition have been bypassed and public servants seconded to outlying regions have not been paid.  While the matter of payments will be in the 2020 AG report, we will seek an Operational Report before Budget 2021,” he concluded.