Former Member
STARS ON THE HORIZON: 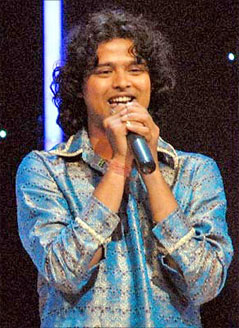 'Music was always in my blood' - Raja Hasan Sagar

Raja Hasan Sagar, one of the finalists of SaReGaMaPa does not need any introduction anymore. He has won all hearts with his soulful singing, and here is he talking about his journey thro' SRGMP.
Raja's journey to the finals of SRGMP has been a topsy-turvy one. Even though he got selected for the show, he did not get selected in any Gharana and so became a part of the "Eklavya Gharana". Later Vishal Shekhar selected him for their Gharana, but his brilliant performance on the song Allah Ke Bande could not save him from going into Chakravyuh. And with him that week was none other than Amanat, who in the Chakravyuh round gave a tough competition and got selected. Raja was again eliminated from the contest. Then it was the Brahmastra Round and Vishal Shekhar, while choosing contestants made sure to get Raja back into the contest. After that, he never looked back. What does he say about this? "Frankly, I never thought that I'll reach the finals. But somewhere down the lane, had a faith too that maybe all the blessings that I got from my elders, my parents would not go waste. I had lot of faith on Allah too."

Raja got his singing training mainly from his Maternal Grandfather. His father, Rafiq Sagar is himself a ghazal singer and also a music director. Even he had a big role to play in grooming Raja as a singer. "Music was always in my blood",that's what Raja says. And how much has SaReGaMaPa helped him grow as a singer? "There has been lot of change when I see myself singing now. Here we are not just learning to sing songs on the stage for the show, but also from all these mentors, SRGMP Guru's and our Music Directors Mukeshji and Sanjayji. Thy have all guided us a lot. They all taught us many finer details of singing, more importantly playback singing and its ways of presentation."