While the political party, A New and United Guyana (ANUG) feels that President Irfaan Ali and his administration are worthy of accolades for the recent city cleanup campaign, it still sees the current government as having to shoulder blame for the squalid state of the city.

An ANUG release yesterday opined that citizens want to see their country thriving as well as being well maintained and clean. As such, it contended that the weekend clean-up was important for the sole reason that it has brought the issues of rubbish, littering, garbage disposal and city administration to the forefront of public attention.

However, the release wryly noted, “Two days picking up rubbish does not solve a longstanding and potentially disastrous problem for our city.”  It was pointed out that the PPP/C used both print and social media to obtain maximum publicity for this weekend’s work, “both to receive plaudits and to criticize the woefully inadequate City Council,” which it argued which bears the responsibility for cleaning up the city. But that aside, it noted that no mention was made of the issues which it felt should be front and centre for any “competent” government. Namely, what are the causes of the garbage problem, and what are the solutions? Mention was made of one Government minister’s trite response when the question of how to sustain the cleanup effort was made.

Mention was also made of the many instances of the inability of a “bankrupt” city hall to pay for garbage collection, and the strikes and work stoppages by the private garbage collectors to whom money is owed by the city. We were reminded that this was not always the case and at one time in the past, the city was indeed a Garden City, prompting the observation and pertinent question, “It is now a Garbage City. What has changed?

ANUG, which is part of a three-party list joinder holding one seat in Parliament –  went on to charge that the cause of the deplorable condition of the city “lies at the feet of the same Government which now seeks credit for a two-day clean-up.” It highlighted that the city of Georgetown is controlled by the PNC, and the mayors of Georgetown have consistently been appointed by the PNC majority in the City Council.

“Unfortunately, the PPP has the power to show its displeasure at the PNC control of the city by starving the Council of funds. How does it accomplish this? By ensuring that the legislation passed in the PPP-controlled Parliament maintains centralization of power in the government and its ministers.”

The release noted that under the Municipal and District Councils Act, the Council is mandated every year to prepare a budget of its expenditure for the year and this budget is not passed until it is approved by the relevant Minister. Further, the revenue of the Council is derived from payment of rates, which are calculated as a percentage of the Rated Value of properties in Georgetown. But the Chief Valuation Officer, it pointed out, who is tasked to value those properties every five years so that a real assessment of rates can be made, has not done such an assessment since the 1990’s. “Maintenance costs and administrative expenses have multiplied exponentially in those twenty-five years.”

And to add fuel to fire, it states that properties in Georgetown with a real value of scores of millions of dollars are charged rates of a few thousand dollars. “City Hall starves, the Minister does not approve realistic budgets, and does not even direct his Chief Valuation Officer to prepare correct valuations of city properties as the law requires.”

It goes further to argue that since the government refuses any increase in rates and taxes, refuses to realistically value city properties, effectively starving the M&CC, it is not difficult to appreciate where the real blame for Georgetown’s woes should be placed. As far as ANUG is concerned, the City Council is left to rely on the government to grant subsidies and allowances, and the PPP continues to centralise power. “The systemic starvation of the city council by the PPP/C for the last 30 years has essentially crippled the Council, it simply cannot afford to maintain the city.”

The release observed that when accused of having too tight a grip on the M&CC’s purse strings, the Government’s standard response is to point out that City Hall is so corrupt and incompetent that it cannot be trusted with money and acknowledged that there is an element of truth to this assertion. However, it bemoaned the lack of co-operation between the central government and the PNC controlled council which was “blatantly” apparent as the campaign was not endorsed by the Mayor. He dubbed the cleanup a “political move” whilst Minister within the Office of the Prime Minister with responsibility for Public Affairs, Kwame McCoy retorted that the Mayor’s criticism of Operation Clean Up remains the “epitome of stupidity.”

“Once again, the true problem is the two large political parties. At some point, those party loyalists must recognize that Guyana comes first,” the release concluded.

What is the PPP doing with all of the VAT it is collecting?

Imagine deh cussing down the mayor and PNC...and the people doing the cussing don't pay property tax. The mayor don't have money. He can't regularly clean the city. The PSC don't want to revalue the properties. Who PSC support gain? Who gets most election campaign money from PSC? See de contradictions? Imagine dem didn't revalue properties since 1995. Lol! From garden to garbage...

Municipal fines goes to the Consolidated Fund the revenue should be given to Town Hall .Gov't G$30Million check was written to the Contractor building the new town hall office the sum is part of the cost, Government claiming it's subvention. 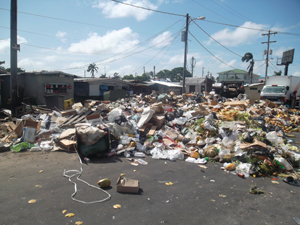 Meantime, the garbage continues to pile up in GT.

Meantime, the garbage continues to pile up in GT.

And the Mayor continues to receive his salary plus perks while doing nothing regarding this and other matters for Georgetown.

And the Mayor continues to receive his salary plus perks while doing nothing regarding this and other matters for Georgetown.

Imagine deh cussing down the mayor and PNC...and the people doing the cussing don't pay property tax. The mayor don't have money. He can't regularly clean the city. The PSC don't want to revalue the properties. Who PSC support gain? Who gets most election campaign money from PSC? See de contradictions? Imagine dem didn't revalue properties since 1995. Lol! From garden to garbage...

What is the PPP doing with the VAT collected from Businesses in GT? An the garbage overwhelms Georgetown the once pristine Garden City.

How is the city looking now after one week since the clean up?