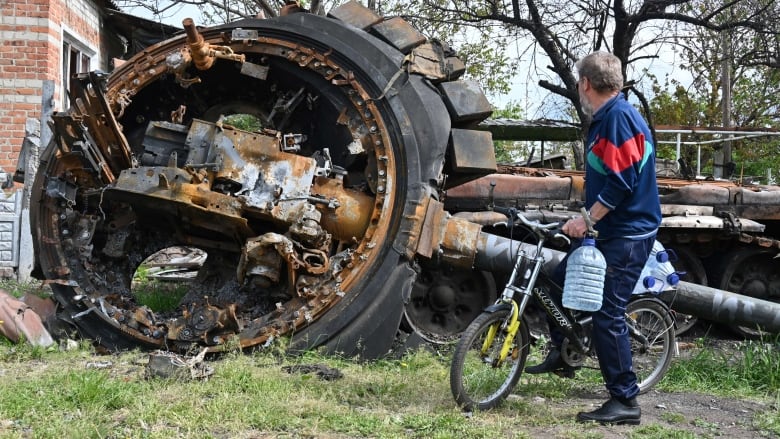 A local resident looks at a destroyed Russian tank next to a residential house in the village of Mala Rogan, east of Kharkiv, amid the Russian invasion of Ukraine. (Sergey Bobok/AFP/Getty Images)

Updates from the ground on Day 82 of the war

The historic shift, which comes after more than 200 years of military nonalignment in the Nordic country, is likely to upset the government of Russian President Vladimir Putin.

Finland announced Sunday that it was seeking to join the alliance, saying Russia's invasion of Ukraine nearly three months ago had changed Europe's security landscape. Several hours later, Sweden's governing party endorsed a bid for membership, which could lead to an application in days.

Foreign Affairs Minister Mélanie Joly said Canada is in favour of a "quick accession" for both countries ahead of meeting in Brussels with the European Union's top diplomat, Josep Borrell.

"Our goal is to be among the first countries to be able to ratify the accession of Sweden and Finland," said Joly. That process in the past has taken eight months to a year.

Those moves would be a serious blow to Putin, who has called NATO's post-Cold War expansion in Eastern Europe a threat and cited it as a reason for attacking Ukraine. NATO says it is a purely defensive alliance.

WATCH | Ex-PM of Finland Alexander Stubb on the push to join NATO:

Countries nearby worry they could be next after Russia invaded Ukraine. Finland shares a 1,340-kilometre land border and the Gulf of Finland with Russia. Putin told Finnish President Sauli Niinisto in a Saturday phone call that joining NATO would be an "error."

Sweden: NATO, but not bases

Sweden's parliament on Monday debated the NATO question after the ruling Social Democratic Party broke its party's longstanding position that Sweden must remain nonaligned and endorsed a plan to do so.

"Sweden needs formal security guarantees that come with membership in NATO," Prime Minister Magdalena Andersson said during the parliamentary debate, adding that the country was acting together with neighbouring Finland. 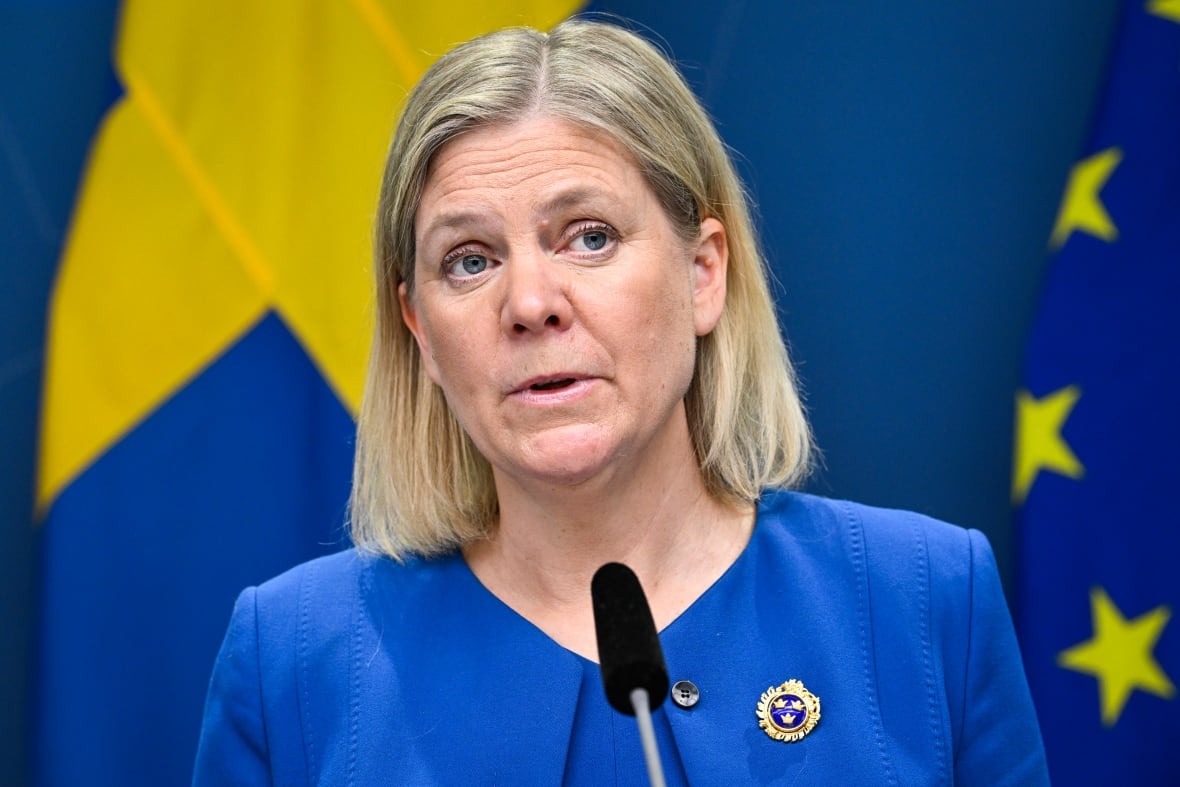 Andersson said Sweden would refuse nuclear weapons or permanent NATO bases on its soil — similar conditions as neighbouring Norway and Denmark insisted on when the alliance was formed after the Second World War.

Putin warned the West on Monday that Russia would respond if NATO began to bolster the military infrastructure of Sweden and Finland.

Speaking to the leaders of a Russian-dominated military alliance of former Soviet states, Putin said the enlargement of NATO was being used by the United States in an "aggressive" way to aggravate an already difficult global security situation.

NATO Secretary General Jens Stoltenberg, meeting with top diplomats from the alliance in Berlin, said the war "is not going as Moscow had planned."

"Ukraine can win this war," he said, adding that NATO must continue to offer military support to Kyiv. 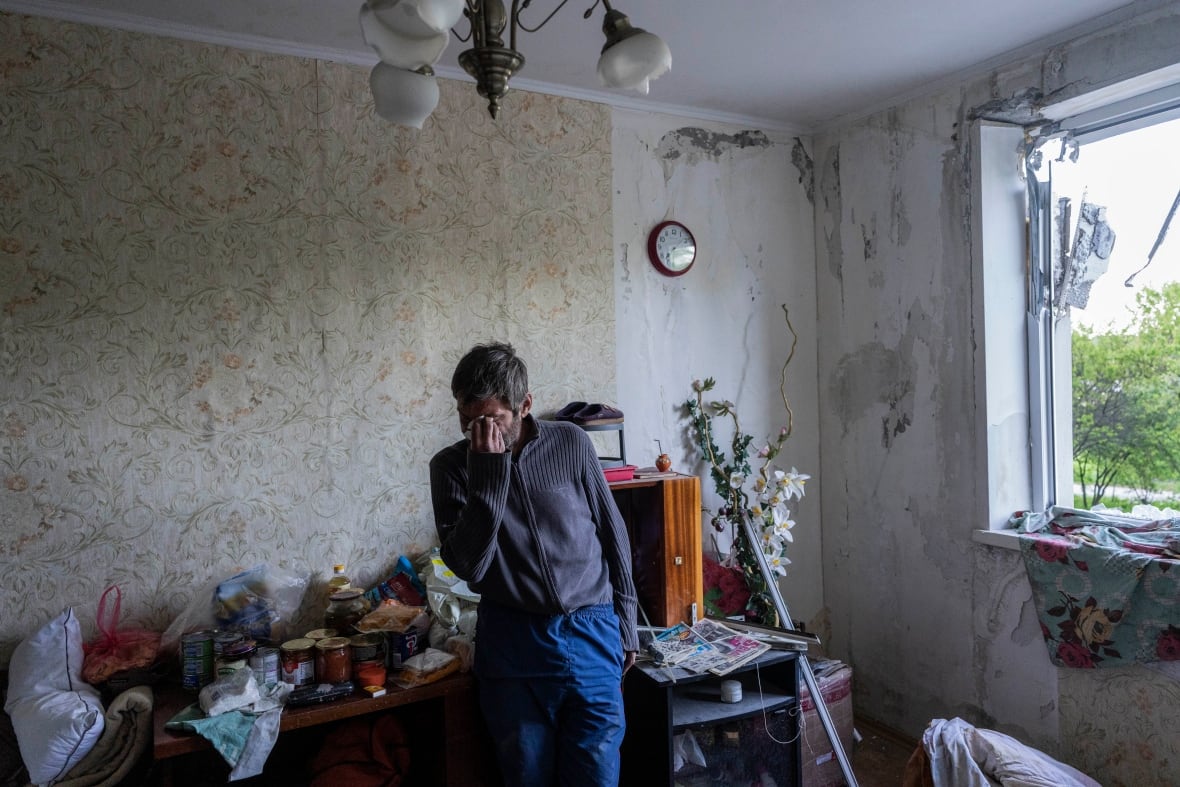 On the ground, Russia inflicted damage but failed to make significant territorial gains in eastern Ukraine, the focus of its war effort since its forces failed to seize the capital, Kyiv.

On Sunday, a Ukrainian battalion in the Kharkiv region reached the Russian border and made a victorious video there addressed to President Volodymyr Zelensky. The video posted on Facebook by Ukraine's Ministry of Defence shows a dozen fighters around a post covered with blue and yellow, Ukraine's colours.

One said the unit went "to the dividing line with the Russian Federation, the occupying country. Mr. President, we have reached it. We are here."

Other fighters made victory signs and raised their fists.

Determining a full picture of the fighting, especially the unfolding battle in the east, is difficult. Airstrikes and artillery barrages make it extremely dangerous for reporters to move around, and both Ukraine and the Moscow-backed separatists fighting in the east have introduced tight restrictions on reporting from the combat zone.

Over the weekend, Russian forces hit a chemical plant and 11 high-rise buildings in Siverodonetsk, in the Donbas, regional Gov. Serhii Haidaii said. Russian missiles also destroyed "military infrastructure facilities" in the Yavoriv district of western Ukraine, near the Polish border, the Lviv region's governor said. Lviv is a gateway for Western-supplied weapons to Ukraine.

The Ukrainian military said it stopped a renewed Russian offensive in the Donetsk area of the Donbas. It also blew up two railway bridges that had been seized by Russian forces in the eastern region of Luhansk, Ukraine's Special Operations Command said Sunday. The aim was to prevent Russia from bringing in more troops to attack the towns of Lisichansk and Severodonetsk. 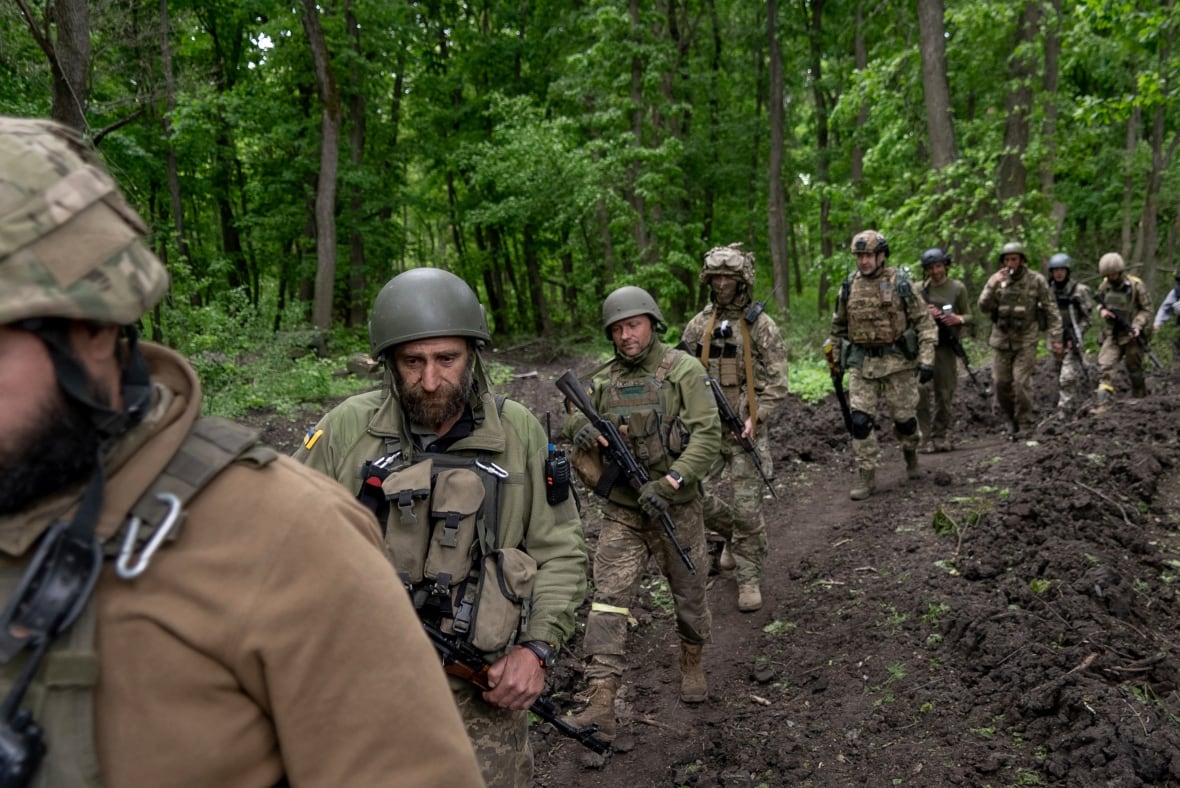 Ukrainian servicemen walk in the forest near a recently retaken village, north of Kharkiv, on Sunday. (Mstyslav Chernov/The Associated Press)

The Ukrainian claims could not be independently verified, but Western officials also painted a sombre picture for Russia.

Russians retreating from around Kharkiv

Russian troops were retreating from around Kharkiv, Ukraine's second-largest city and a key military objective earlier in the war. After weeks of bombardment and continuing strikes around the wider Kharkiv region, the regional governor said there had been no shelling in the city for several days.

Despite the continuing threat of missile attacks, many people were returning home to Kharkiv and other cities around Ukraine, Anna Malyar, deputy head of the Ministry of Defence, said.

16 hours ago
Duration 2:47
The remnants of war are still visible in villages around Kharkiv, where Russian troops have retreated, leaving behind destruction in the streets and fear in the minds of residents.

Refugees were returning not just because of optimism that the war might ebb.

"Living somewhere just like that, not working, paying for housing, eating ... they are forced to return for financial reasons," Malyar said in remarks carried by the RBK-Ukraine news agency.

McDonald's said Monday that it has started the process of selling its Russian business, which includes 850 restaurants that employ 62,000 people, making it the latest major Western corporation to exit Russia since it invaded Ukraine in February.

The fast food giant pointed to the humanitarian crisis caused by the war, saying holding on to its business in Russia "is no longer tenable, nor is it consistent with McDonald's values." 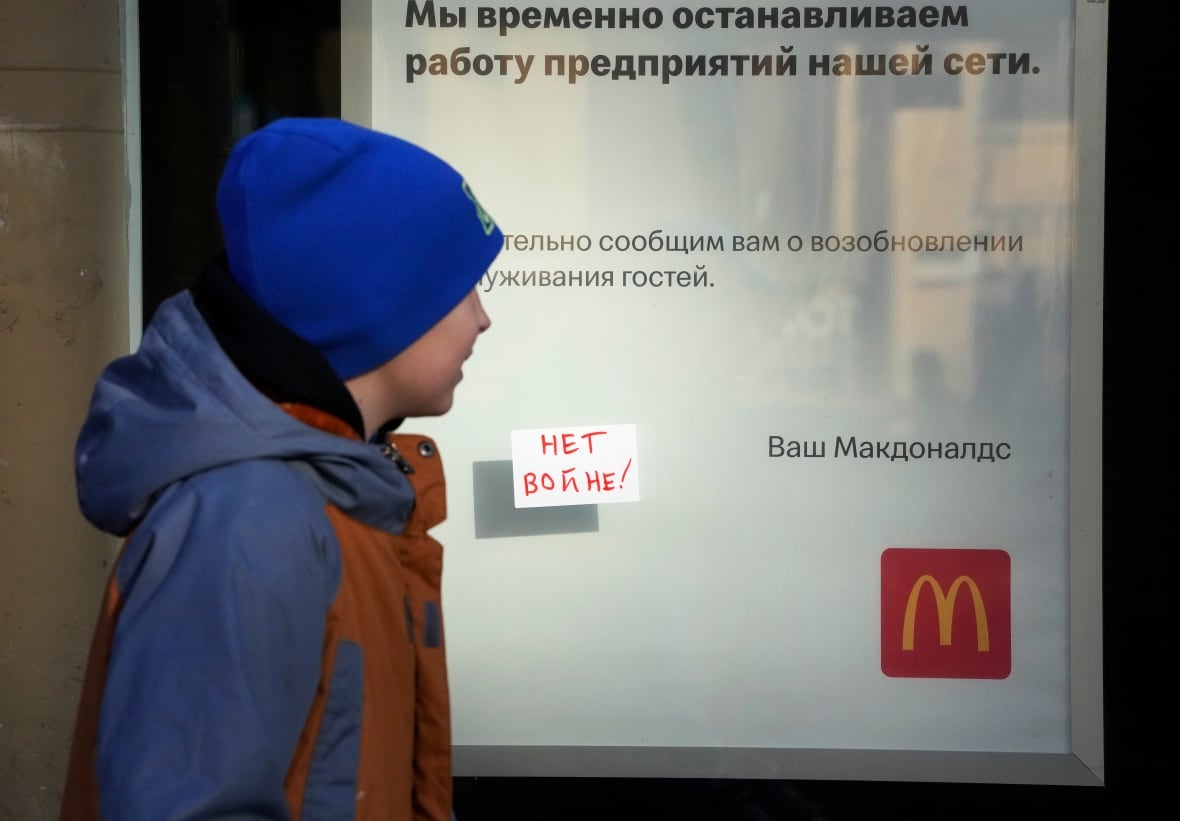 A boy walks past a 'No War!' sign stuck to a window of a McDonald's restaurant with the restaurant's closing notice in St. Petersburg, Russia, on March 15. (The Associated Press)

McDonald's was the first American fast food restaurant to open in the Soviet Union, which would collapse in 1991.

Corporations from British energy giants Shell and BP to French carmaker Renault have pulled out of Russia, taking a hit to their bottom lines as they seek to sell their holdings there. Other companies have stayed at least partially, with some facing blowback.

Renault said Monday it was selling its Russian branch to Moscow City and its 67 per cent stake in Russian company Avtovaz to a local state-owned institute.

The CEO of Renault Group, Luca de Meo, called it "a difficult but necessary decision" and didn't rule out returning to the country, "in the future, in a different context."

With files from Reuters

It would be awesome to see Ukraine move into Russia and take dem rass over. Either that or the Russian people take to the streets by the thousands demanding a stop to the killing of soldiers on both sides, then topple Putin and his band of criminals.