Commissioners to probe 2020 general and regional elections sworn in 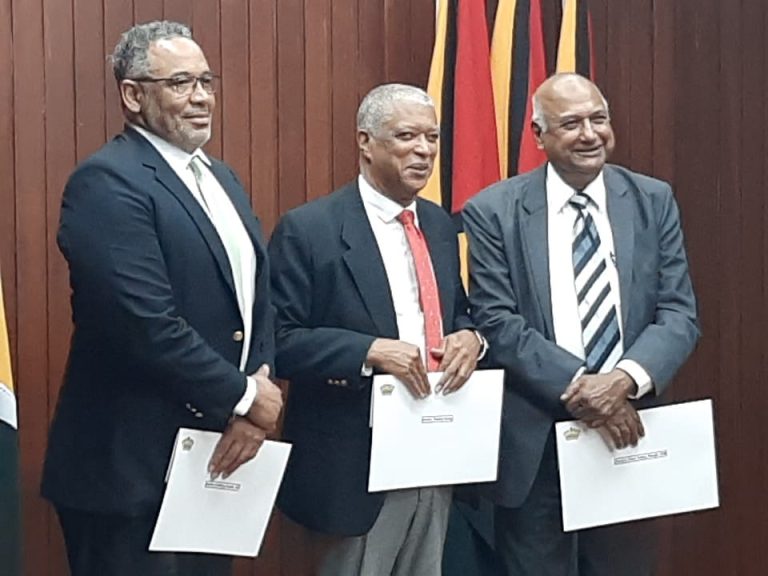 The Commissioners of Inquiry into alleged attempts to rig the March 2020 general and regional elections were sworn in on Tuesday before Chief Magistrate Ann Mc Lennan.

Ahead of the release of the Terms of Reference of the Commission of Inquiry (COI) later Tuesday, Attorney General Anil Nandlall said the probe aims to probe the threat to Guyana’s democracy in 2020 through “flagrant attempts made to alter unlawfully the results of those elections at several stages of the protest.”  There were at least two declarations by the then Returning Officer for Region Four, Clairmont Mingo and one effort to remove more than 100,000 votes by the then Chief Elections Officer  Keith Lowenfield after the recount.

“That must be investigated so that persons can be held responsible. The illegality and conspiratorial role played by many will be exposed and most importantly it must form part of the permanent record of this country if only  for one objective that there must never be a reoccurrence of what transpired at those elections,” Mr Nandlall said when asked by Demerara Waves Online News.

The projected cost of the COI was not immediately available as the Attorney General said  “at this point in time I’m not sure” but he admitted that such inquiries are “never a cheap undertaking.” “Monetary value alone cannot determine the importance of events,” he said, adding “Guyana was pauperised by rigged elections…so a monetary cost ought not to be the basis for not pursuing this undertaking.”

The Attorney General also said the COI was aimed at putting behind Guyana’s ‘sordid history of election rigging”  for the next generation of Guyanese and ensuring that “this never happens again.”

Mr Nandlall said the COI would not in any way conflict with election petition appeal cases that are before the Caribbean Court of Justice (CCJ), Guyana[s final c0urt of appeal.