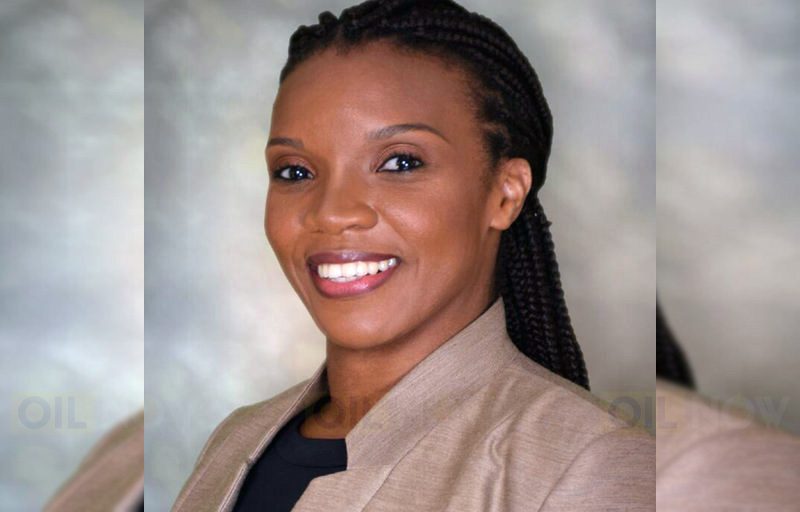 Guyana’s Low Carbon Development Strategy 2030 (LCDS) is the best place to start if you want a bird’s eye view of the country’s renewable energy plans. The LCDS outlines the overall strategy for natural gas hydropower, solar, wind and biomass energy in the context of Guyana’s socio-economic development alongside hydrocarbon resource development. Natural gas development has been touted as a “bridge” to facilitate the green shift in power generation and a long-term back-up to support renewables, however it is shaping up to be a permanent, main highway to Guyana’s development.

The current timeline pegs natural gas power generation to replace fuel oil in the next two to three years. In the meantime, solar farms will be commissioned to supply approximately 30% energy demand to mostly hinterland areas. The Amaila Hydropower plant, which requires significant investment in infrastructure, is scheduled to be incorporated in the national grid by 2027. It would be quite a gamble to bet on each project being delivered on time or on natural gas being just a “bridge.”

The Amaila project has been delayed before, wind power is in the early planning stages and, solar farms are rolling out steadily with low impact on national demand despite its high impact on hinterland access to power. Should the Gas to Power project become a reality, any delay or derailment of these renewable energy projects will solidify the preeminence of natural gas development.

The American Chamber of Commerce of Guyana (AmCham Guyana) Roundtable Discussion kicked off with opening statements from US Ambassador to Guyana, Hon. Sarah-Ann Lynch and, Minister in the Ministry of Public Works, Hon. Deodat Indar, it was clear that the LCDS is the focal point for renewable energy development in Guyana.

The AmCham Energy Roundtable Discussion brought together high-level stakeholders to give their perspective on the theme “Advancing Opportunities in Renewable Energy”. The Roundtable discussion outlined support and information available for potential investors through government agencies, GOINVEST and the Guyana Energy Agency (GEA) offering advice and services and, the Export-Import Bank of the US offering financing for US products. Much of what was presented is already in the public domain, scattered among several organizations and their websites. However, when all the pieces of the energy picture come together, will renewable energy lead or play a supporting role?

Solar energy development is being pursued in the private and public sectors. These advances are supported by several fiscal incentives: exemption of value added tax (VAT), exemption of import duty of solar PV panels, water heaters, allowance to write-off capital expense within 2 years and a one-off, two-year corporate tax holiday for the importation of items for solar energy investments. What has been the impact of these initiatives?

Dr. Peter Ramsaroop, CEO, GOINVEST, painted a picture of energy cost savings possibly being directed to investment in developing economic activity such as agro-processing. But will companies operate in this way given the current global climate characterized by rising cost of shipping, supply chain challenges, high oil prices, uncertainty and inflation? In the time it takes to recoup the cost of solar energy equipment, savings to be realized through lower energy cost may be eroded by higher cost of labour, imports and operations.

Additionally, although solar energy works well during daylight hours with fair weather, when night falls and on cloudy days batteries are needed to supply green energy. Without this expensive, imported commodity, the grid will continue to rely heavily on natural gas.

Several audience members expressed interest in energy being sold to the grid. Mr. Bharat Dindyal, CEO, Guyana Power and Light (GPL) explained that there is currently no legislative provision for feed-in tariffs (FIT). Further, the grid is limited to hosting just 15MW and the significant accommodations will have to be made to allow FIT to be accounted for within the customer billing system. Many of the questions posed during the Question-and-Answer segment suggest that there is strong interest for FIT in Guyana. However, as it stands currently Guyana does not have significant capacity for FIT.

The information systems needed to make FIT a reality must form the framework of plans and early decision making. Dindyal estimates that 3 billion USD of investment is needed to expand and modernise the current power transmission and distribution (T&D) system over the next 8 years. With this timeline, the increased power supply capacity from the Gas to Power project is likely to be ahead of the capability of the T&D system.

Figure 1 shows the energy mix projected in the LCDS. If all goes well hydropower is anticipated to dominate the supply of renewable energy in Guyana, beginning with the commissioning of the Amaila Falls Hydropower project in 2027. Before the discovery of large offshore oil fields, Guyana earmarked hydropower as the basis for its energy transformation. However, hydropower has the inherent weakness of requiring sufficient rainfall year on year. Climate change models contradict the projection of continued, uninterrupted growth in hydropower which assumes no severe droughts within the next 20 years. Any shortfall in hydropower can only be addressed by greater reliance on the natural gas “bridge” which is the only source with significant and viable on demand capacity. 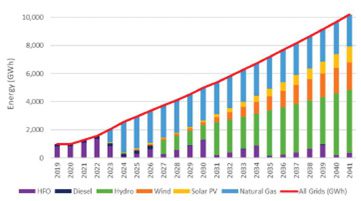 Dr. G.R. Narsimha Rao outlined the potential for cogeneration in the sugar industry, fuel blending and wind energy. Of these three, only wind energy is projected to have a significant contribution to Guyana’s future energy mix (Figure 1). Further, wind energy is projected to have a greater contribution to energy supply than solar. Generally, plans for wind energy development are in the early stage with primarily data collection and pilot installations. As in the case of hydropower and solar energy, slippage in wind energy roll out timeline will likely be supplemented by natural gas.

The Gas to Power project is getting a jump start on changing Guyana’s energy landscape as renewable energy projects slowly ramp up capacity. Natural gas is likely to play an even bigger role than the LCDS is predicting.

The shift from expensive, imported heavy fuel oil (HFO) to natural gas will undeniably be advantageous for Guyana, and gas produces roughly half the carbon dioxide emissions and almost none of the smog-producing particulate emissions that HFO does.

But building on that success and integrating significantly more renewables will be an even more ambitious step. The rollout of solar and wind energy needs to be more aggressive to ensure that green shift favors renewable energy. The contribution to the national grid from solar and wind needs to be greater, brought on earlier and opened up for wider contribution through FIT. Each initiative must be undergirded by swifter modernization of the T&D system.

Dr. Lorraine Sobers is a Fulbright Scholar and currently lectures at the University of the West Indies, St. Augustine. Dr. Sobers has a BS in Chemical Engineering and postgraduate degrees, MS and Ph.D., in Petroleum Engineering from Texas Tech and Imperial College London respectively. She has 18 years’ experience in the energy sector specializing in geologic CO2 storage. Dr. Sobers is the Project Coordinator for CO2 Emission Reduction Mobilisation (CERM) Project and a Fellow of the Caribbean Policy Consortium.