How To Make Really Good Restaurant-Style Ramen at Home

A brief history of the popular Japanese dish, and tips for making your own. 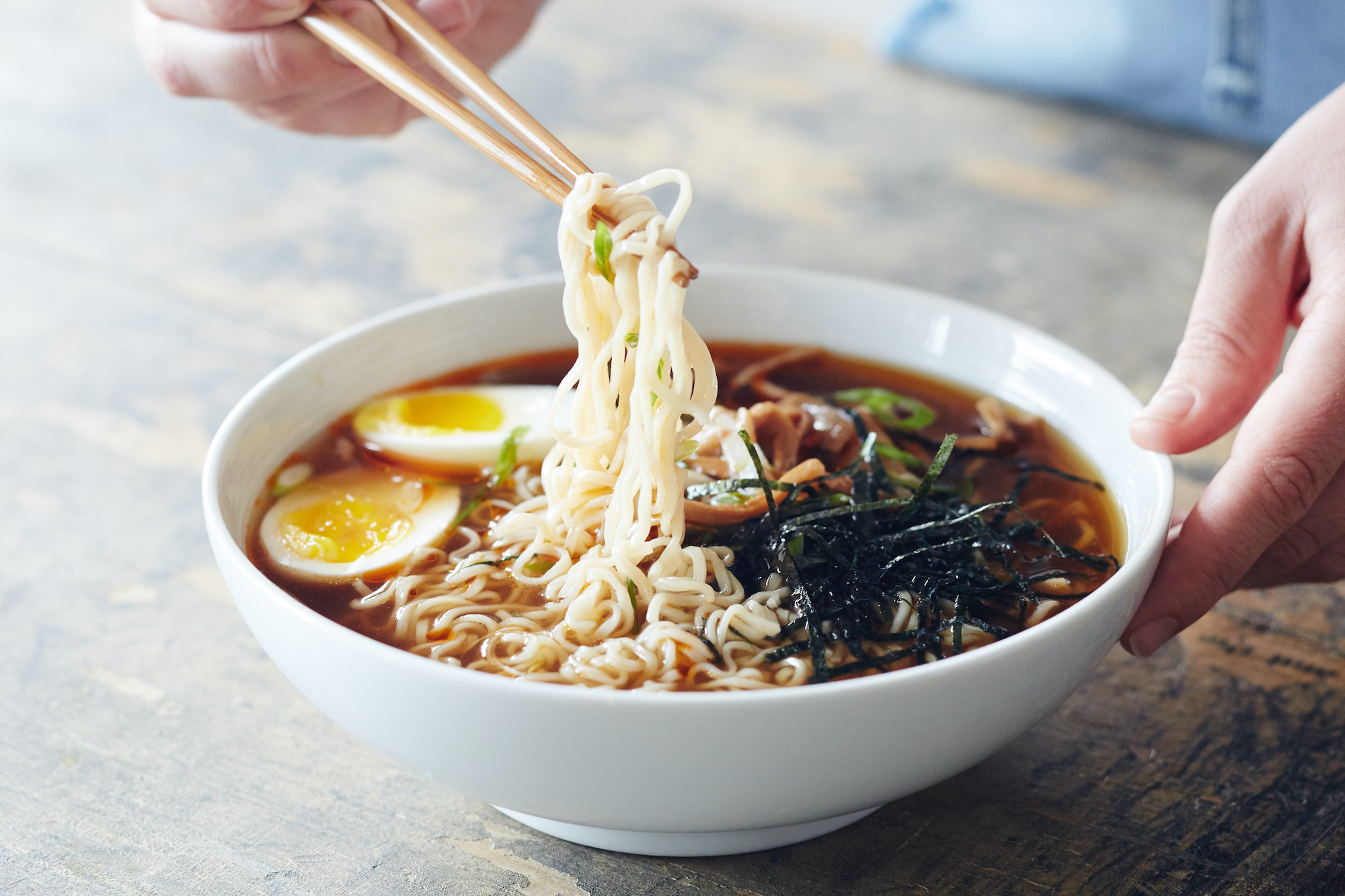 Ramen is a Japanese soup, by way of Chinese noodles, that has become an American obsession. Not only have ramen noodles become part of our cultural lexicon in their ubiquitous dried mass-produced packets that sustained a generation of latch-key kids and college students, but they also grew to a burgeoning restaurant sub-culture of scavenger-hunt ramen shop tours and enthusiastic slurping.

With this recipe, we’re exploring how to do that enthusiastic slurping at home. We’ll tackle the important components of ramen — broth, seasoning, noodles, and toppings — with respect to our obsession but with a bit of grace and ease.

Why This Method Is the Best for Most Home Cooks

At its most basic, ramen is a soup of well-seasoned broth and noodles. Toppings like meat and eggs help make the bowl a meal, but they’re not where we’ll put our efforts in this recipe. Here, we’re concentrating on a richly flavored chicken broth and selecting the best noodles.

A Brief Look at Our Relationship with Ramen

Ramen noodles are actually a Chinese invention that grew roots in Japan. The bouncy ramen noodles gained popularity in the 1930s as Chinese immigrants began cooking in soba shops. The blending of Chinese noodles with Japanese broth making and eating rituals gave birth to many modern styles, with ramen shops and noodle carts becoming fixtures of Japanese dining. During World War II, push carts and street vendors were made illegal as many ingredients were rationed, and ramen nearly went extinct.

American ramen shops were likely born around this time as well, as many Japanese noodle makers left the country during the post-war economic downturn. While these 1960s-born ramen shops might not have seen the popularity that more modern ramen shops have today, it’s worth noting that most of these shops outlasted the diner fare also popular during this era.

At the same time, instant ramen was also introduced to America, marketed as healthy food to busy families. Oodles of Noodles, Cup of Ramen, and products of their ilk didn’t see fame until the 1980s. The ’80s also saw the advent of Japanese “ramen tours” that became, and remain, a popular sightseeing expedition for hungry American travelers.

Culturally speaking, ramen shops are one of the few fast food icons to avoid franchise conglomeration with a simple system of noren ramen. Loosely translated to mean branch shops, ramen shop keepers are reputed to teach employees their ramen recipes, then send these employees off to open their own shops after just a few years of service. This is good for ramen-lovers, but also means that ramen recipes, methods, and traditions have morphed slightly, like a long game of telephone over the last two decades in America. 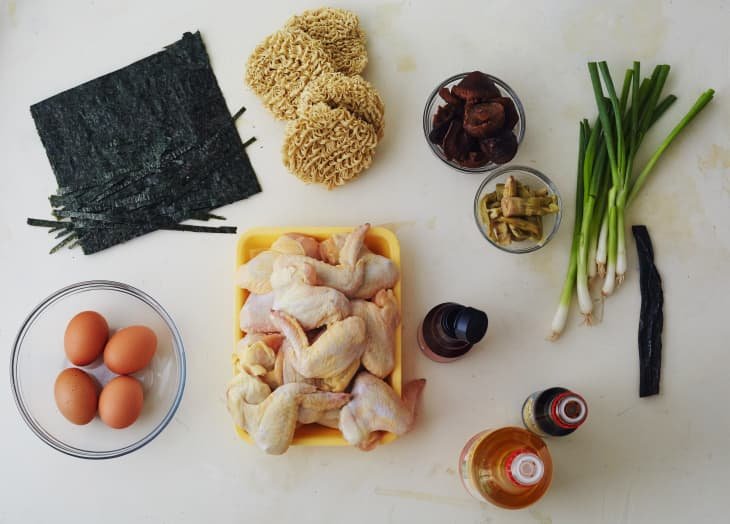 Making the best ramen at home begins with your shopping cart. If you keep the staples for making dashi on hand (kombu and dried mushrooms), plus a good soy sauce and mirin, you’re on your way to a near-complete ramen-at-home kit. Ramen noodles will round out the kit.

Ramen broth is much like any rich soup broth, in that it uses bones and aromatics to make a base for noodles and toppings. The most significant difference between ramen broth and plain stock is the two-part flavoring system. Kombu and dried shiitake mushrooms enhance the broth while it cooks, giving the broth an earthy taste unlike other broths.

The second addition to ramen broth is a system of flavoring known as tare. Tare is a mixture of intensely flavorful liquids or pastes that are added to the ramen broth just before serving. The most basic is a 50/50 mixture of soy sauce and mirin. Some are made with miso or include chili pastes.

For a restaurant-quality bowl of ramen anytime, keep kombu and dried shiitakes on hand for enhancing even homemade broth. Ditto for soy sauce and mirin. You may also want to keep pickled bamboo shoots and nori on hand for ramen enhancements.

Fresh ramen noodles are nothing more than wheat noodles, made from flour, salt, and water, but treated with an alkaline agent that gives the noodles their yellow hue and springy, chewy texture. Fresh noodles are more common in major cities like New York where ramen noodle producers are within close proximity. If you see them in the refrigerator section, snatch them up and enjoy them in ramen within a few days.

Dried or instant ramen noodles are also made from wheat flour, but fried then dried before packaging. At most Asian markets, you can find packets of these dried noodles without the tiny soup flavoring packets, so grab these and keep multiples on hand for making ramen anytime.

Our ramen broth is a combination of a rich chicken stock and a flavorful dashi broth. By using inexpensive chicken wings, roasting them before turning them into stock, and adding dashi essentials to the broth, we create a layered, flavorful broth ideal for ramen at home.

Body, or thickness, is the difference between restaurant-quality ramen at home and the ramen we enjoy from cups or packets. Chicken wings deliver this body in spades. Their joints, skin, and tender bones break down during a long simmer, producing a gelatin-rich broth hearty enough to stand up against springy ramen noodles. This ramen broth is also flavored with ginger, kombu, dried shiitake mushrooms, and soy sauce.

Putting It All Together 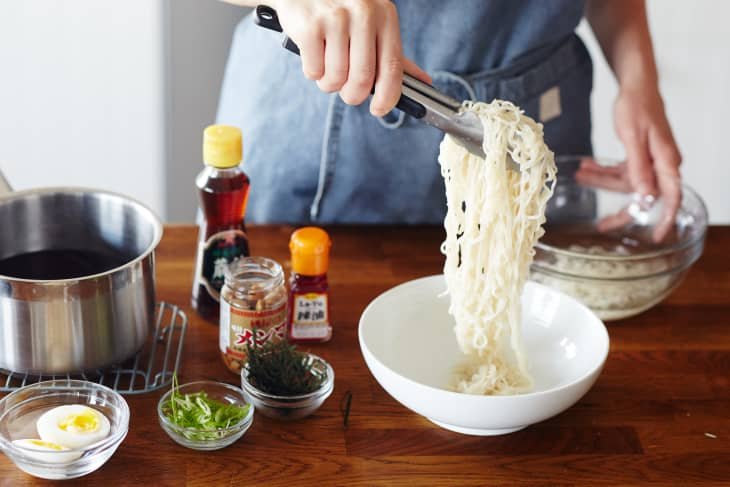 There is truly no wrong way to eat ramen. Tradition dictates that the noodles should be devoured while the broth is still hot, which means bringing your mouth closer to the bowl and using chopsticks to guide the noodles to your mouth. This maneuver is likely the mother of the ramen slurp. Sucking the noodle into your mouth also cools the noodles on their way in. A soup spoon can and should be used in conjunction with chopsticks for sipping the broth and enjoying the ramen’s egg topping.

How To Make Really Good Restaurant-Style Ramen at Home

For the shoyu tare:

For the eggs and noodles:

Make the broth and tare:

Make ahead: The broth and tare can be made and stored in the refrigerator up to 1 week ahead. The broth can also be frozen for up to 3 months.

Meghan Splawn is the Food Editor for Kitchn's Skills content. She co-hosts a weekly podcast about food and family called Didn't I Just Feed You.

This post originally appeared on The Kitchn and was published November 7, 2019. This article is republished here with permission.