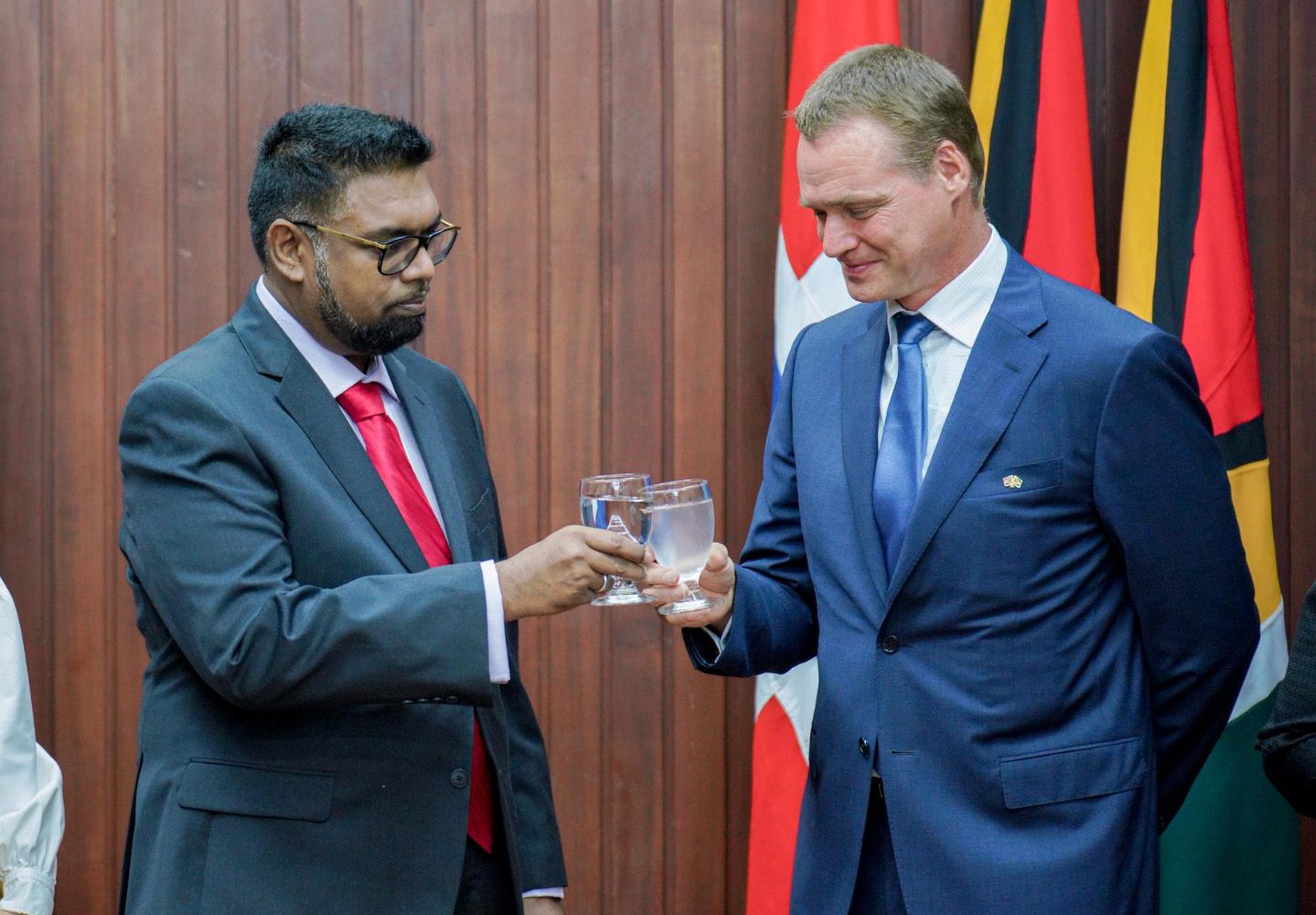 Guyana’s President Dr. Mohamed Irfaan Ali and Norwegian Ambassador to Guyana, Odd Magne Ruud, at the Office of the President in Georgetown, on Friday, May 13, 2022.

As the global energy transition kicks off, the recently accredited Norwegian Ambassador to Guyana, Odd Magne Ruud, has shared that his home country is willing and able to contribute to an increased renewable energy mix in the South American country.

“Norway and Guyana have both vast resources in oil and gas in our offshore territories. The Norwegian government remains committed to develop our petroleum resources in the best possible way. Our aim is to be on the forefront of preparing for a global shift from fossil fuels to renewables,” Ruud said.

He said in the meantime, Norway will strive to produce oil and gas in the lowest possible fashion.

“Within the framework of our cooperation, we would like to contribute to increased renewable energy mix in Guyana. We believe it will be an excellent insurance policy that will facilitate the necessary transition from fossil fuels when the time comes,” Ruud explained when he handed over his Letters of Credence to President Dr. Mohamed Irfaan Ali on Friday.

Ruud reminded that the Kingdom of Norway and Guyana share a deep commitment to economic and social transformation through the 2030 agenda and the sustainable development goals.

Against this backdrop the non-resident Ambassador said, “We congratulate Guyana on your new Low Carbon Development Strategy, and your commitment to balanced obligations to cut emissions while developing recent offshore petroleum discoveries. We know how petroleum resources can benefit a whole nation, but also the challenges that it brings in opposition to a much-needed global green transition.”

Norway has been instrumental in Guyana’s green push in recent years in a significant way. It has paid Guyana more than US$200 million for the preservation of its forests, and Guyana intends to use these proceeds to fund low carbon initiatives. This example is also being used by Guyana to advocate for the formalisation of the international forest carbon market.

Guyana has been making strides in its transition to renewable energy. Already, the government is streamlining the development of the Amaila Falls Hydropower Project which will add 165MW to the grid. This will be supported by solar-powered farms across the country, wind power on the coast as well as biomass in factories. Importantly, the LCDS projects that by 2035, 67% of Guyana’s energy will be powered by renewables.

Although not renewable energy, the natural gas that the country is looking to pipe from its lucrative oilfield will act as another clean transition fuel. It will also help to phase out the use of expensive and carbon-intensive heavy fuel oil. The power plant is expected to generate 300 megawatts (MW) of power and the Natural Gas Liquids (NGL) plant will meet domestic demands.

With the country’s energy demand expected to grow within the next five years, the government has eyed the reduction of electricity costs by 50%.