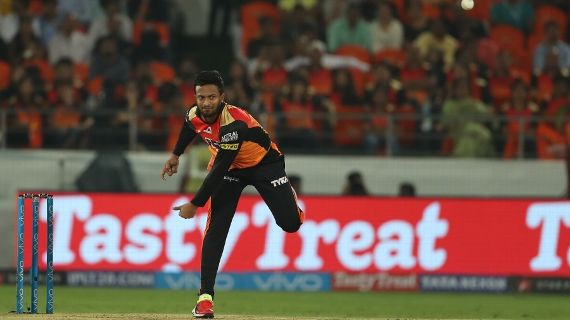 Sunrisers Hyderabad panicked and flailed in a chase again, but nowhere near as much as they had on Friday. Captain Kane Williamson's half-century, and his 59-run stand with Shakib Al Hasan sealed yet another win that was set up by their bowlers, who had managed to keep Kolkata Knight Riders to 138 for 8 in 20 overs to lay the foundation for a five-wicket win. It was Sunrisers' first away match of the season and the win puts them firmly on top of the points table.

Knight Riders had a sluggish start to the game after they were put in and apart from Lynn's 49 that stretched across a brief rain interval, they barely had a foot in the game. That was until they realised their three-pronged spin attack was virtually impossible to score of. For much of Sunrisers' chase, Knight Riders were calling the shots; but with every over of spin bowled, the Williamson-Shakib alliance grew more confident and a calculated acceleration against pace at the right time put to rest the prospect of collapse-and-recovery style win.

Knight Riders tie themselves up with their tactics

Knight Riders made all the team changes that were demanded of them - Vinay Kumar was left out along with Rinku Singh, and the teenage duo of Shubman Gill and Shivam Mavi came in for them.

Sunil Narine didn't have a good time against Chennai Super Kings on Tuesday. Robin Uthappa did. So when Uthappa was pushed up to open - for only the second time since the end of the 2016 season - against a vastly superior fast bowling attack, it didn't seem plausible that Gill and Mavi would end up batting one after the other, at No. 7 and 8.

As it turned out, Uthappa's plan to get his eye in from a familiar batting position didn't work out. Chris Lynn and Nitish Rana brought the momentum with their second-wicket stand of 39, before a red-hot Billy Stanlake cramped Rana on the cut - his most productive shot of the evening - and had him lift one to Manish Pandey's right at point; the former Knight Riders batsman took the first of two world-class catches with a lunge to his right and a grab on the second attempt as he fell towards the floor.

It was at this point that Knight Riders made the mysterious punt of sending Narine at No. 4. Perhaps the decision was informed by the fact that they were going at less than seven per over, but it was a strange one nonetheless - Narine had only batted at No. 4 once before this innings. In the Pakistan Super League.

If quick runs were the requirement, they didn't come. When Narine well for 9, he had consumed 10 balls and hit only one boundary. It had caused a telling change in the batting order.

As expected whenever they go out, Sunrisers had clearly set out roles for their bowlers. Bhuvneshwar Kumar was allowed to find swing early on, Stanlake was given the license to hit the deck hard, and Kaul was the pacer who would then go full. Perhaps the only way it didn't go right was that Lynn enjoyed the predominantly back-of-a-length bowling that fed his punches through and over the infield as he backed away. But he was stopped on 49, trying to drive off that very same length against Shakib Al Hasan, who held on smartly to his left off his own bowling. The left-arm spinner had a dot-ball percentage of 44% through his spell and his two wickets forced Dinesh Karthik to drop anchor. Knight Riders tried to replicate their full-attack policy that had worked against Super Kings after they'd lost five wickets cheaply, but there was no coming back tonight. Stanlake got Andre Russell to splice one between point and third man, and Pandey was there once again, this time sprinting backwards before lunging to hold on.

For the 10th time in 16 matches since the start of the 2016 season, Sunrisers managed to restrict a team to less than 150 while bowling first. And this was on a night when Rashid Khan went for 31 and got no wickets.