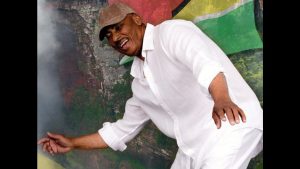 Holder was recognised as a pioneer of Caribbean music and was well-known for songs such as “Something of Value” and “Hold On To Your First Love”.

He had over the decades toured several countries and performed alongside Eddy Grant, Bob Marley, Aretha Franklin, Mighty Sparrow and The Jackson Five.

Holder was based in Canada.

IIn widely circulated video of a conversation with his wife, Jennifer, Mark while he had been hospitalised, he had thanked his fans and others for “being very supportive of me all my life.” In that video, he had also referred to another of his popular songs, “Where There’s A Will, There’s A Way” and he added that “I’m fine in the Lord.”

When a blind man cries, by Deep Purple

Court of the Crimson King, by King Crimson For some reason I don't see many musicians in Guyana.
People certainly like music, but its not like the rest of South America, where if you sit on a street corner for a few hours, 4 musicians will walk by.

I bought a guitar and I have been learning to play, its coming along nicely (almost kicking Eric Clapton's ass

).
I had no idea what I was doing when I bought the guitar, I actually bought a nylon string guitar, classical guitar, but that is not what I play...
I like the Doobie Brothers, AC/DC, Justin Timberlake, Savage Garden, Uncle Kracker, Pharrell Williams, Bill Withers, Bishop Briggs, Cat Stevens and that whole 70's, 80's 90's music scene.
I play that stuff on my guitar of accidental choice.

I got the guitar going, it sounds good, now I'm learning to layer and write music, trying to figure out how it all fits together, that is coming along, but to really get into that, the right thing to do is start Jamming with other musicians.

Its a difficult thing, I think I would fall asleep with classical musicians, matching taste and getting a club going is not so easy... but if you play a musical instrument, saxophone, drums, any instrument or like singing, then chat about what you like here and maybe we can get something going.

Singing is much more difficult than I ever imagined, singing along with a song, and singing just to instruments playing, is two different ball games.
Its not easy making music, but it is simply amazing when it clicks.

So the idea is to play around with musical ideas, layer sounds and see if we can make music.
Few clubs actually make it, its very much about passionate interest and people that click. There are some famous examples like the Cuban Social club, that churned out stars, but they few and far between.

Many people think its about getting a guitar and then you get hot women, its not, its love of the process, if that is the only goal, doubt you going to become a musician, that's just the marketing.
Its actually work, and the magic happens if you get lucky.
Its kind of like comedians, when you meet them in real life, most are super serious people, off stage.

So chat and maybe something emerges... idea is to have some fun trying to make magic.

The Best Of Jim Reeves

Many a times, we even take a perception or two from them to include the same in our own marriage. But wait! Do not just adhere to everything thoughtlessly because even the superstars can get a couple of products incorrect on their marriage day.

I am a day late but better late than never. Happy First of May.

When I first met you, didn't realize
I can't forget you, for your surprise
You introduced me, to my mind
And left me wanting, you and your kind

I love you, oh you know it

My life was empty, forever on a down
Until you took me, showed me around


My life is free now, my life is clear
I love you sweet leaf, though you can't hear

Come on now, try it out

Straight people don't know, what you're about
They put you down and shut you out
You gave to me a new belief
And soon the world will love you sweet leaf

Another year...happy first of May...

luv it around .40 with the stars and the image, does the same throughout.

From Wikipedia, the free encyclopedia
(Redirected from People, Hell & Angels)

People, Hell and Angels is a posthumous studio album by the American rock musician Jimi Hendrix. The fourth release under the Experience Hendrix deal with Legacy Recordings, it contains twelve previously unreleased recordings of tracks he was working on for the planned follow-up to Electric Ladyland. It was released on March 5, 2013.

I am thinking of getting one of these. You can download new drum kits and midis from an extensive database.

Happy First of May