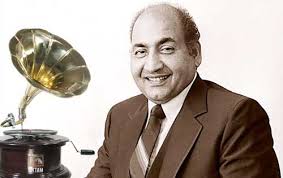 July 31st marks thirty seven years, since the passing of one of the Legendary Singer in India....Padmashree Mohamed Rafi, (July 31/80).

Rafi was born in a small village called Kotla Sultan Singh near Amritsar in December 1924.When his family moved to Lahore, he was still a baby.
It is said that a fakir used to come to their locality in Lahore every day and sing. The young Rafi was so fascinated by him that he used to follow him around. His elder brother Hamid was aware of Rafi's love for music and encouraged it. "In fact," says music director Naushad, "A lot of credit for Rafi's success must go to Hamid who knocked on several doors and tried everything to ensure that his brother got work.

The young Rafi was so engrossed with music and singing, he started taking music lessons from his the professional "Ustad Wahid Khan."

It is said that Rafi used to sing for friends and small occasions and as fate would have it,
one day himself and his borther attended a show featuring the "Great" K.L. Saigal. At the time, there was a power failure, and KL refused to sing, as the microphone was not operative, Rafi's brother Hamid, went to the organisers and practically begged that Rafi be given a chance to sing.
He was thirteen at the time, and the performance he gave was so impressive that the music director, invited him to Bombay.

The music director gave him a break, the movie was Gul Baloch,
the song became a hit, but then later, he met another Great "Naushad" and from then on there were no stopping for Rafi, Naushad said "When I heard Rafi, I liked his voice and promised him work in future. I was already doing a film called Shahjehan with Saigal. Rafi, who was a fan of Saigal, came to me with a request: that it was his greatest desire to sing with Saigal. I gave him one line in the song Roohi roohi mere sapno ki rani," recalls Naushad. "The first full song he sang for me was in Anmol Ghadi -- it went like Tera khilona toota balak..." he adds. "Then again he sang for me in Dillagi: Is duniya mein aye dilwalon dil ka lagana khel nahin and Tere koonche main armanon ki duniya leke aaya hoon."

On his personal life..Rafi married Bilquis his wife, and had four sons and three daughters, it is said that Rafi was a teetotaller, a religious and extremely humble person. He was a devout Muslim. Laxmikant-Pyarelal duo once observed - "He always gave without thinking of the returns". Rafi was also famous for his various humanitarian efforts.

The date of his passing away was perhaps
divinely pre-ordained, for it is said that one who dies in the
holy month goes to heaven. There was no person more deserving of that status than the pious and God-fearing Rafi, who never touched a drop of alcohol, who never told a lie, who never had a harsh word for anyone, and who worshipped his work. A man whose songs wiped away many a sorrowful tear from the eyes of those who were struggling under the burden of life and brought tears of ecstatic joy to many more.

It shows a kaleidoscope of India and many movie stars

well..i never knew that there is a new “haathi Mere Saathi”

soi saw it in Tv line up n decided to set PVR as this is 1 of my most LOVED movie..n the movie that i ‘fellin love with’ my boy RK…iei was hooked on his movies after seeing this movie..it was a school show…ie my primary school took all the kids to see this movie n i liked it so much, I made my Maa take me back to see it.  As a lil kid, I cried so much whn Ramu died…n even whn he ‘cried’ …

Anyway…I was shocked to discover that I had recorded a new Haathi Mera Saathi..looks like a comedy…..so i deleted. The origina movie is iconic..why would they do anew 1 n from the looks, it seems STUPID.

Anyway…wht’s new with u guys?

Like Chami taking a long sabatical n I I dont like gyaffing with myself so now I am ‘scarce’ ..n will be popping in now n  again to say hello !

Happy Sunday to u all!

After 30 mins I turned it off. The movie shows Indians as idiots. Are Indians really that violent, irresponsible and carelessly lackadaisical?

Not recommended for mature audience.

1 of my fave songs

i like old time movies..n song althought there r a few goodnew ones that I enjoy.

my fave starbai has been Rajesh Khanna since i was a lil pickney!! ..reason is  I like family drama n romance..

i dont enjoy  all the revenge n stuff like Amitabh used to do..all dem dacoits n rigmarole stuff!!( although i have enjoyed some of his movies like Kabhi Kabhie n barsaat ki ek raat)

Ishaan who had a learning disorder that involves difficulty reading due to problems identifying speech sounds and learning how they relate to letters and words was sent to boarding school.  Luckily for him an unconventional art teacher was sent to school . He was able help the imaginative student discover his true identity.

It's a tear jerker since it brought back memories of old school days.

Omg!! I love this song..Mits bhai can u pls give translation??

n this lil kid KILLED it!!

Ishita was the winner of SRGMP  a couple of yrs ago..she sings like a nightingale.  He competed on SRGMP lil kids but placed in top 10(her dad died 2 months before the show aired n she-has been wearing her dad’s jacket for every episodes since..

He was so good at his trade, his voice resonated with emotions, raw emotions that would hold one spellbound like the ancient mariner weaving a tale that must be told, and after then, that impact of that story would remain for a lifetime. Such was the golden voice of the Legendary Master, like a magician he would hold one fixated whils't he weaves his enchanting spell with accuracy at the beholders, who can only be dumbstruck with awe, such emotions and sadness would truly soothes the listeners and create that impact to last a lifetime. The man that was endowed with that "bardaan" was Mukesh Chand Mathur, known as Mukesh. .

In focusing our lens on this genious, we shall compile 100 of his songs, songs that are still popular, songs that has left an impact that we can relate to, songs that if you were to pass by a rumshop, you would see many a troubled souls taking solace in the tunes of Mukesh, wether it be a "Dost Dost Na Raha" or "O Mere Hamrahi"

In reminising on Mukesh, will we pull articles from the internet, we will features songs from different sites, we will pull lyrics from where we could obtain same, translations will be done by friends with credit given at the end of each song. Comments will be entertained.

Beforehand I would definately express our "Thank You" to the many providers of articles of which will be used. As usual our project will not be a profitable or monetary venture, but a venture to give satisfaction to the many fans of Mukesh.

Ray, you can use the ending of each song that we will be offering to do some advertisment, you can work it out with Amral. A brother helping another brother

Did I forget anything? oh, Lynn,Saeed, DaFreak/Riya, will be looking for assistance from you guys.